Two cities locked down, virus kills 17 - China has put on lockdown two cities at the epicentre of a new coronavirus outbreak that h ...
Fear grows in Tas mine worker search - Fear are growing for the safety of a miner who went missing after an earth collapse at Tas ...
Qld couple 'wouldn't survive' plane crash - A Brisbane husband and wife onboard a light plane that crashed into water at high speed wo ...
Three dead as water tanker crashes in NSW - Three United States firefighters have died in a fireball after their aerial water tanker c ...
Holmes ready to bounce back to NRL best - He may still have one eye on the NFL but Valentine Holmes says nothing has distracted him ...
What we know about the new coronavirus - Global health authorities fear the transmission rate of coronavirus will accelerate as hun ...
US to add more countries to travel ban - The United States is moving to add more countries to its travel ban list, US President Don ...
US mum accused of suffocating children - A US woman arrested on suspicion of killing her three young children told investigators th ...
Aussies waiting longer for aged care spots - Older Australians are waiting longer to enter residential aged care, with most waiting abo ...
eScooters Hit Darwin Streets - In a move that is sure to delight short distance commuters, the much anticipated 12 mont ... 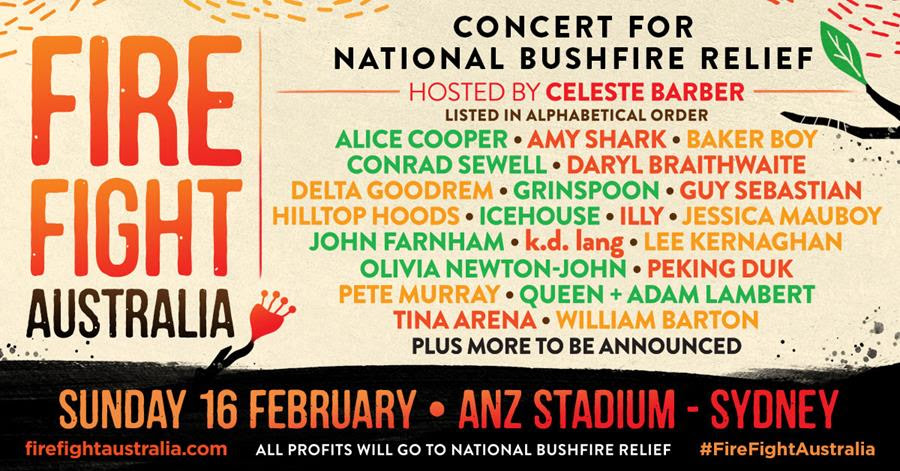 TEG Dainty and TEG Live are proud and humbled to present a spectacular line up of artists to perform at FIRE FIGHT AUSTRALIA on Sunday 16 February 2020 to raise money for NATIONAL BUSHFIRE RELIEF.

FIRE FIGHT AUSTRALIA will be hosted by writer, actor and comedian Celeste Barber, who has already raised more than $50 million towards bushfire relief through her own record-breaking online appeal.

Tickets go on sale today at 12pm AEDT via Ticketek