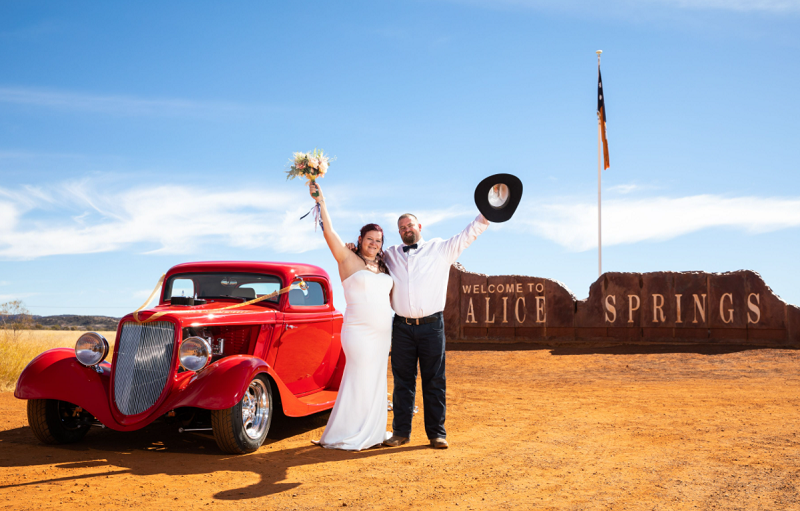 Two lucky car lovers have the chance to win the wedding of their dreams at an iconic motorsports festival in Alice Springs.

They could score $15,000 for their big day at the Red CentreNATS and get hitched against the stunning backdrop of the West MacDonnell Ranges.

The wedding package up for grabs includes a licensed celebrant, wedding ceremony and reception for up to 20 guests with a food and drinks package.

The lovers will be accommodated at the Crown Plaza Lasseters and receive a photoshoot with their car if they entered the event along with videography, hair, make-up, flowers and a cake.

The wedding will be a highlight of the event, with the ceremony to take place at Blatherskite Park and the reception at Lasseters.

The lucky bride and groom will even get to lead the convoy of cars as part of the event’s street parade.

NT Major Events CEO Tim Watsford says sparks have flown at the event in the past, which contributed to the idea.

“Plenty of couples have met at Red CentreNATS and gone on to start a family, and we’ve even witnessed marriage proposals,” Mr Watsford says.

“But this is the first time we will actually hold a wedding as part of the event.”

Summernats co-owner Andy Lopez says there are not many events where loving your car leads to real-life love.

“Spending all that time and money on car projects normally has the opposite effect,” Mr Lopez says.

“The wedding of the century is going to be a lot of fun!”

For couples who have already tied the knot, they can also enter the competition to renew their vows.

Ticket holders can enter by sending in a one minute video via the event website explaining why they want to get hitched at Red CentreNATS before July 8.

The winners will be married on Saturday, September 4.